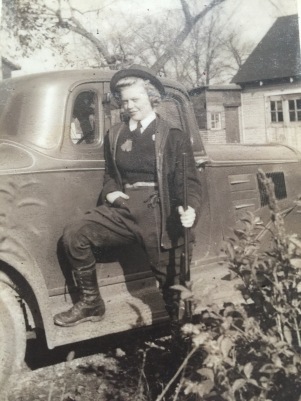 To everyone else she was Barbie, but since my mother called her Ruth, we did, too. I don’t even know why.

Our Aunt Ruth will be buried on Friday in a rural cemetery in upstate New York, and we will not be there. She, my sister, Eileen, and I had discussed this. She was quite clear that she didn’t want a fuss: no funeral; no flowers. So, as we all agreed, we spent our time and efforts while she needed them.

We were with her on her 95th birthday. On her 96th birthday we couldn’t come until the following weekend, so we sent her 96 roses, and combined with all the other flowers she received, her tiny house was so filled with flowers there was no place to set a coffee cup. I didn’t make it for her 97th, but I took a small comfort in knowing that Eileen and her children were there.

Eileen, living nearer, visited Ruth more frequently than I. We made little visits together that always felt like pilgrimages, and I wept so often after saying good bye, thinking it would be the last time, I think I got complacent. It almost started to feel that she would always be there. But last week we held her in our arms as she took her last breaths. As w

e drove away from the hospice, I kept looking around me at the familiar landscape, thinking I would probably never come back. After a lifetime of trips to that cluster of little towns on the Hudson, it felt very strange. It was the end of more than her life. It was the end of an era in my own life, and the end of my family’s history there. The shadows of my aunt’s and my parents’ young lives, of their hopes and dreams, and the young lives of their parents, all left behind, with no one living there to meet them and remember. 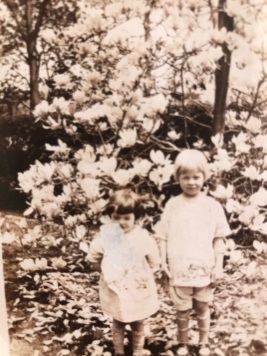 What matters is that you craft a life with what you are given: you make friends and lose them, you have your small pleasures, your personal triumphs, and your private tragedies. 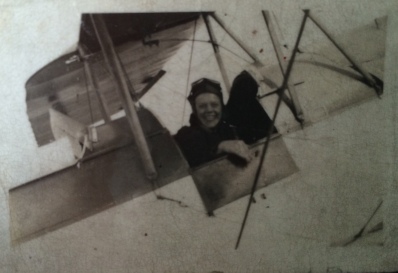 Barbara Ruth was an adventurer.

Like my mother—her sister—Ruth was vibrant, enthusiastic, adventurous, and headstrong, stubborn, opinionated, and extraordinarily difficult. And let’s be honest: she took great pride in being difficult. Apparently, it’s a family trait.

But she also had great love. She adored my Uncle Ken, and he adored her. They endured terrible tragedy together, but they always had each other. Not in a fluffy, romantic way, but in a difficult, holding it all together, we’ll get through this kind of way. They had grit.

They travelled extensively throughout the United States and Canada, and they seemed always to be having fun. They once surprised me by appearing in Halifax Nova Scotia, where a ship on which I was working as a singer had docked. They were so pleased with my delight at seeing them.

During World War II, on her way to Seattle to meet her husband’s ship, Ruth was the survivor of a notorious train wreck. She decided not to go to the dining car at precisely the right moment. Many passengers died. She walked away.

Ruth could handle a gun, and she used to hunt and trap with her father to feed their family during the depression. She was a gifted seamstress and knitter, and until she lost her sight near the end, made countless caps for preemies at local hospitals, and beautiful, intricate baby sweaters, and booties, and caps. I gave the last one to someone only this past summer.

When I married, she made me a full trousseau of dishtowels and placemats with matching napkins, and crocheted tiny white lace snowflakes and beaded icicles for my Christmas tree. I still have them all—even the dish towels.

When Aunt Ruth’s first husband, our Uncle Ken, died suddenly after many years of marriage, Eileen and Ruth and I went up to their little cabin in the Adirondacks together to empty out the remnants of their life together. As a remembrance, Ruth gave me one of 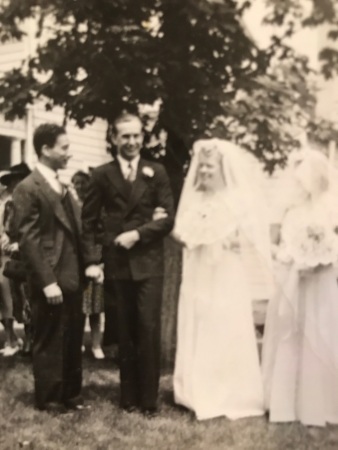 Ken’s plaid flannel shirts, over whose torn pocket she had patched a red felt heart. I gave it back to her on her 95th birthday. She hadn’t known I’d kept it, and she cried with delight to have it back.

She fell in love again at the age of 80, and married another lovely man, Al, who was both generous and kind. We have a picture of her and my mother on the night before the wedding, their arms around one another, laughing. Ruth was as beautiful as any younger bride, so filled with happiness. The rain came down in buckets, but it didn’t matter.

To her sorrow, Aunt Ruth outlived Al, too. They only had a few years together.

My mother and Ruth were both beautiful young women, and like the princesses in the fairy tale, one was blonde and the other was dark. As she got older, Ruth was proud that her blonde hair had no gray in it. Last week at her bedside, as Eileen stroked her head, she reminded Ruth that even at 97, her hair was still blonde. 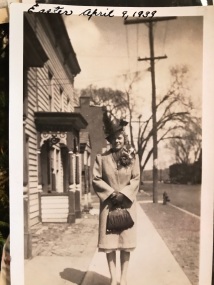 Ruth in an extraordinary hat.

She was preceded in death by her son, Keith, her brother, William, her first husband, Kenneth Rabie, her sister, Ethel Riordan, and her second husband, Alton Hajeck. She is survived by a daughter, Susan, a granddaughter, Paula, and a great-granddaughter, Nora Kate. They are also strong women.
She was also loved by her extraordinary friends, Randy Anselment, and Laura and Tim Plumway, who, beyond all call of duty, were a blessing to her in the last years of her life.

This tribute comes at Eileen’s urging. Aunt Ruth did not want an obituary, but since Ruth didn’t always do what she was told, my sister and I are following her example. We come by our stubbornness honestly.

Ruth is the last of her generation in my family. My father and mother have already been gone, it seems, forever. For my sister and me, she has left another gap in our hearts, another hole in the landscape of our lives. She fought, she loved, she created, she struggled. And in this eternal and sometimes merciless universe, she mattered. Her loves mattered. Her struggles mattered. Her fierceness mattered. Her sorrows mattered. The people she lost matter. The lives she created matter.

We loved her. We love her still.

We will miss her always.